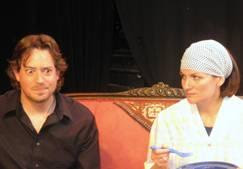 The Shawnee Playhouse in Shawnee on the Delaware, PA presented The Center Stage Players‘ production of “A Cheever Evening” by A. R. Gurney based upon the works of John William Cheever who was often referred to as “the Chekhov of the suburbs.” The majority of his writings took place in the Northeast section of the United States and often dealt the duality of human nature especially in regards to presenting an acceptable personal façade while hiding a corrupt nature within oneself.

The play is a series of vignettes which seem separate but soon become interrelated as it progresses. The first act of the play takes place during the 1930s and 40s and begins with a couple who are able to hear the going ons of other people living in the city on their radio. Some are amusing while a number of the scenes they overhear are disturbing. Other portions of the act relate the desperation of the times of “The Great Depression” era both on an economic and personal level. The economic level leads one character to abandon his morals in order to steal from his neighbors to feed his family while the personal level of the depression allows a woman to abandon her marital life as she meets a man kinder than her husband. These are just two examples how people are effected by the times they live in but the play goes beyond this as the second act of the play takes place during the 1960s in which we discover the duality of the human condition changes very little throughout the passage of time.

This presentation of The Center Stage Players’ production of “A Cheever Evening” by A. R. Gurney has concluded its run at The Shawnee Playhouse in Shawnee on the Delaware, PA on April 25th and it’s this reviewer was unable to make his recommendation of this play until now. It was a good play with a very talented cast well worth watching. The next Shawnee Playhouse in Shawnee on the Delaware, PA presentations will include The Center Stage Players’ production of “Dr. Cook’s Garden” April 30th - May 9th, The Pocono Skies Electro Music Festival May 15th and 16th, and “Manhattan Casanova” May 21st - 30th. Please contact The Shawnee Playhouse at 570-421-5093 or Explore their Website at www.theshawneeplayhouse.com for more information and to reserve your ticket. Please feel free to Explore The Center Stage Players’ Website at www.centerstageplayers.org to learn more information about them.

Those who enjoy the Passionate Art Lover level of membership in The Forwardian Arts Society are offered a $3.00 discount off the admission fee of selected The Shawnee Playhouse Productions.

Photograph provided by The Shawnee Playhouse.
Posted by Unknown at 7:29 PM

just a quick note... the first scenes are set in the very late 1940s, not as you suggest, the Great Depression of the 1930s. In fact the setting of the Postwar is essential to the Play's brutal mixture of class expectation and humdrum daily life.