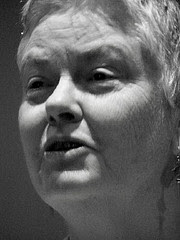 The Pocono Community Theater in East Stroudsburg, PA presented Lunafest on Saturday April 3rd which consisted of the viewing of a series of 10 short films created by, for, and about women as introduced by Mollie Whalen who is the director of the Women’s center at East Stroudsburg University. Proceeds from the event went to benefit the Breast Cancer Fund and Women's Resources of Monroe County.

The films shown touched upon a variety of topics while remaining consistent with the festival’s overall theme. They ranged from experiencing a new life, to self discovery, to dealing with a family crisis, to economic frustration, to understanding life with through a profound wisdom. Although all were well made and embodied a great deal of meaning, my favorite among those shown was “Monday Before Thanksgiving” directed by Courtney Cox.

The film depicts woman who lives alone and is encouraged to find a man to begin a relationship with. After exploring the idea and wondering if her life is valuable without someone to share it with, she meets an older woman on a bus who shares with her how fulfilling life can be while living it alone. The younger woman then invites her friends and family to her apartment for a joyous celebration. The film ends with the woman dancing in celebration of her autonomy alone and nude in her apartment.

I particularly enjoyed this film as it counters most mainstream films made about women. These film mostly focus on a woman’s quest to find and marry a man of her dreams so she can become complete. These films often end with a wedding from which we are to believe all of her problems of being lonely will end in spite of the financial pressures brought about by a very expensive ceremony will later bring. These films deny the possibility a woman can live her life happily single and that a meaningful marriage can take place without a wedding. It was good to see a film about a woman not hypnotized by the popular and devaluating myths so prevalent in the mainstream cinema.

Others films shown during the festival included, “A Summer Rain” directed by Ela Their, “Plasitic” directed by Sandy Widyanata, “Roz (and Joshua)” directed by Charlene Music, “DIY: Emancipation” directed by Lynn Robinson, “The Kinda Sutra” directed by Jessica Yu, “A Vida Politica” directed by Kat Mansoor, “Anjali” directed by Maya Anand, “Omelette” directed by Nadejda Koseva, and “The McCombie Way” directed by Kristina and Nick Higgins. The films were followed by a discussion held by those viewing the films. This proved to be quite lively as the cinematic merits and themes of each film were explored. You’ll find more photographs of the festival at The Forwardian Arts Society Pocono Community Theater Gallery at www.myspace.com/forwardian_arts.

The Pocono Community Theater in East Stroudsburg, PA offers local film lovers an opportunity to experience the best in independent and foreign film not commonly shown in larger commercial venues. These include films made by local film makers and the inclusion of special events to enhance the community at large. The next events at The Pocono Community Theater will include a showing of the documentary film entitled, “Holocaust Remembrance: the Hidden Children” on April 8th and 11th beginning at 7pm focusing on the stories of those children who hid from the Nazis in WWII Hungry with a question and answer period with some of the survivors after the film. The event will also feature a screening of a film about longtime Stroudsburg resident Tom Breslauer. The theater will hold an Artist’s Reception beginning at 1pm on Saturday April 10th featuring a body of Rod Cameron’s work entitled, “Paradise Found” and the body of Clarissa Jan Ward worked entitled, “Not only the Earth but also the Heavens.” The exhibition will continue until May 16th.

The Theater will also present “Silent Shakespeare” beginning at 8pm on Thursday April 22nd featuring a showing of the work of William Shakespeare as depicted in films made during the Silent Film Era while accompanied by music performed live by Dreams of Fire, Mad Lucas, and The Business Fairy. In addition to all this, The Pocono Community Theater will host The First NEPA Poetry Slamfest beginning at 8pm on Friday April 30th featuring 2009 Women’s Individual Word Slam Champion Rachel McKibbens along with voice performances by Youth Poets featured in HBO’s “Brave New Voices,” Urban Word NYC, The Philadelphia Youth Poetry Movement, and Urban Mountain Voices. There will also be a Mock Slam featuring Youth spit poetry in a high energy competition. Please Contact The Pocono Community Theater at 570-421-3456 for more information.

Websites mentioned in this article include The Pocono Community Theater at www.poconocommunitytheater.org, Lunafest at www.lunafest.org, Dreams of Fire at www.myspace.com/dreamoffiremusic, Mad Lucas at www.myspace.com/themadlucasband, The Business Fairy at www.myspace.com/thebusinessfairy, Rachel McKibbens at www.rachelmckibbens.com, HBO’s “Brave New Voices” at www.bravenewvoices.org, Urban Word NYC at www.urbanwordnyc.org, The Philadelphia Youth Poetry Movement at www.phillyyouthpoet.org, and Urban Mountain Voices at www.urbanmountainvoices.org.
Posted by Unknown at 8:06 PM