Theatrical Review: The Importance of Being Earnest 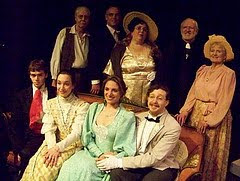 The Shawnee Playhouse in Shawnee on the Delaware, PA presented The Worthington Players production of “The Importance of Being Earnest” by Oscar Wilde. The play is well know as a classic comedy of manners and this presentation of it demonstrates why. It is very well cast and the timing of the work is right on. This later aspect in regards to the play’s timing is very important in as any attempt to deviate from the author’s intent would unnecessarily place the impact of the work at jeopardy. It takes a keen eye and astute understanding of the work to make it work and Ms. Julia has such attributes.

However, it must be said, “The Importance of Being Earnest” is a hard play for a modern audience to get into. It’s timing is very much a reflection of the Victorian era in which is was written and it takes a while for those living in the modern era to slow their perspectives down from the fast pace life (including the modern comedic styles) we’ve become accustomed to absorb the sublime intricacies inherent in the script. It takes almost the entire first act of this three act play before the audience begin to laugh.

But, when the audience do laugh; they laugh heartily. There is a point in many modern productions of this play when the audience finally become in synch and are able to enjoy Oscar Wilde’s famous sense of humor. We begin to understand the subtle inferences on society and its mannerisms Wilde is making as we begin to recognize the universality of them by reflecting upon them in our own. We also begin to enjoy it as a sort of self congratulatory celebration we are now let in on the joke Mr. Wilde is telling us.

The cast of Oscar Wilde’s “The Importance of Being Earnest” consists of Robin Kessler as Jack Worthing, Marshall Haskell as Algernon Moncrieff, Rob Eilenberger Howell (who also served the production as the assistant director) as Dr. Chasuble, Art Zulick as Merriman, Merlyn Clarke as Lane and the Footman, Pamela Kelly as Lady Braknell, Liza Grando as Gwendolyn Fairfax, Nicole Dietze as Cecily Cardew, and Pat VanVarick as Miss. Prism. As mentioned earlier, the casting of this play was excellent as the acting was superb. It’s difficult to maintain one’s faith in the play’s humor when no one in the audience is laughing. It can become discouraging after a while. But, this cast was able to perform the play at an appropriate pace as if the audience had been laughing from the very first humorous line.

The Worthington Players production of “The Importance of Being Earnest” by Oscar Wilde was directed by Jan Julia and Stage managed by Leah Rosengarten. Don Slepian was the Music and Sound Technician while Travis Southard was the Lighting and. Also served as the Sound Technician. Kevin Hillman was the technical assistant and Missy Benefield was the costumer. The producers were Ginny and Charlie Kirkwood. The Shawnee Playhouse Executive Di4rector is Midge McClosky and The Group Sales of their productions are handled by Mary Horn (who also served as a member of the Box Office Staff) as assisted by Becky Haskell. The theater’s Publicist is Amy Cramer.

This production of “The Importance of Being Earnest” by Oscar Wilde continues its run at The Shawnee Playhouse in Shawnee on the Delaware, PA until April 11th. Although it is a hard play for a modern audience to find amusing right away, it is worth tasking the time to find its comedic nature. In doing so, an uncommon laughter will fill you heart. In actuality, you may find yourself wanting to see this play again now that you understand the humor. The next Shawnee Playhouse presentations will be The Center Stage Players’ production of “A Cheever Evening” April 16th - 25th, “Dr. Cook’s Garden” April 30th - May 9th, The Pocono Skies Electro Music Festival May 15th and 16th, and “Manhattan Casanova” May 21st - 30th.

Those who enjoy the Passionate Art Lover level of membership in The Forwardian Arts Society are offered a $3.00 discount off the admission fee of The Shawnee Playhouse Productions (excluding Children Theatrical Productions and those presented by non Shawnee Production Companies). Please contact The Shawnee Playhouse at 570-421-5093 or Explore their website at www.theshawneeplayhouse.com for more information and to reserve your ticket.
Posted by Unknown at 10:31 PM