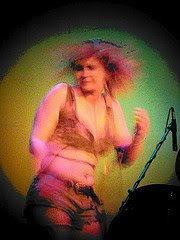 The Sherman Theatre in Stroudsburg, PA presented another installment of their Severed Sinema Series on Thursday March 18th entitled, “Cult Movie Madness” featuring the films “Suspiria” and “A
Clockwork Orange” with special musical guests Nu Prosta Kaif along with work from a variety of artists that enhanced the event. The musical performance was taped by Shane Izykowski for a future video featuring the band. A sizable crowd attended the event including those who formed a picket line protesting the nature of one of the films.

Those entering the Sherman Theater were greeted by a variety of works created by numerous local artists. They included Judy Zarach, Jennifer Smith, David B. Schappert, Brittney Stever, Kailei Picciotti, and Abby Braman. The work complimented the evening’s event as many of the images sought entry to the same areas of the mind most horror films do. Many depicted emanative scenes entreating the viewer to linger for a while.

The evening’s festivities began with the showing of the 1977 Italian horror film entitled, “Suspiria” which was a directed by Dario Argento and co-written by actress Daria Nicolodi with whom the director was romantically involved at the time. It stared Jessica Harper, Udo Kier, and Joan Bennett in her final film role. It’s said “Suspiria” is the first of a film trilogy the director refers to as "The Three Mothers" which were followed by the films “Inferno” in 1980 and “The Mother of Tears” in 2007.

However, Earl Kessler who is the curator and host of the Severed Sinema series expressed doubts about the verity of the claim as the films seem very unrelated to one another and the claim could have been simply a publicity ploy. But, the film does have one distinction that doesn‘t seem to be in dispute. It was the final feature film to be processed in Technicolor before the plant was closed.

The film itself takes place in Germany at a prestigious dance academy in Freiburg. An American Ballet student arrives and strange things begins to happen not only to her but those around her as well. The director Dario Argento does a very good cinematic job in creating a sense of suspense and atmosphere, but it never really seems to pay off. It comes close at times, but not quite close enough. It even had elements common in the severed sinema series of being so bad it’s good. But, the film’s plodding pace diffused this potential. Still, it was good to watch this film with your friends if only for them to hold your hand to assure you it was almost over.

During the intermission, the heavy metal band Nu Prosta Kaif performed led by Dmitry on vocals, Lex on lead guitar, Iggis Nossdrugis on bass guitar, and Wil Mohlenhoff on Drums. The performance included a dancer of whom I was to shy to ask her name. The music was loud and befitting the very best of the genre. This included the added spectacle of the costuming and special effects seen on stage. The songs written by Dmitry and played by his band mates hit the audience hard and they kept coming back for more. As mentioned before, the whole performance was recorded by Shane Izykowski for a future video featuring the band.

Later that evening, the 1971 Stanley Kubrick film “A Clockwork Orange” was shown. This classic film was based on the 1962 novel by Anthony Burgess and stared Malcolm McDowell as a charismatic, psychopathic delinquent named Alex DeLarge who leads a violent street gang who he calls “Droogs” which is from a Russian word meaning friends or buddy. Besides the artistic approach of violence which led the film to be so controversial it was banned from many theaters throughout the world, another creative attribute is the language spoken by the characters comprising of a mixture of Salvic and English set to a Cockney rhyming slang and used as a secret language between the gang. Although the linguistics is confusing, they begin to draw an audience member deeper into the film and the main character’s psyche. In fact, the film stands as a criminating indictment on psychiatry and attempts to utilize the practice to control the behavior of others.

The film takes place in the near future and opens with the street gang at the Korova Milk Bar which serves mescaline-spiked milk. They are soon seen beating up an elderly vagrant, fighting another gang, and performing a home invasion in which the a man is assaulted, restrained, and made to watch while his wife is brutally raped by Alex as he sings “Singing in the Rain.” They return to the milk bar as a group of performers are sitting at a neighboring table. A woman among them begins to sing a piece from Beethoven and one of Alex’s gang mocks her. It is then we discover Alex’s affection for Beethoven’s work when he quickly chastises him.

Later in the film, Alex become challenged by the gang who wants to give him less power and perform more ambitious crimes. This leads Alex to attack the gang to re-establish his leadership of them. He succeeds and becomes “benevolent” by agreeing to invade another home which belongs to a woman who owns a health farm. However, Alex’s Gang set’s him up to take the blame for the home invasion and the death of the woman. He is then sentenced to 14 years in prison.

Once in prison, Alex becomes friends with the chaplain and takes an interest in the Bible’s more violent passages even envisioning himself as a Roman soldier who beats Jesus on the way to his crucifixion. The minister of the Interior arrives at the prison seeking volunteers for the Ludovico technique which is an experimental aversion therapy for rehabilitating criminals. Alex eagerly steps forward and is accepted.

Alex soon finds himself restrained with his eyes mechanically affixed to remain open while being shown films depicting acts of extreme violence. He is also given a drug to induce revulsion while witnessing the acts. However, in one sequence involving scenes of Nazi Germany, the soundtrack of the film features the 9th Symphony written by Beethoven. Alex protests fearing he may experience the same revulsion to the music as he would the images, but his protests are unheeded.

Alex is later seen in front of a large audience who wish to see the result of the experiment. A man soon appears on stage with him who physically assaults him to which Alex is unable to respond. He then encounters a semi nude woman on stage which he is also unable to respond to. He’s declared cured but the prison chaplain protests saying Alex has no real choice and morality is all about choices and free will. He is quickly quieted by those who accuse him of merely arguing semantics.

Alex leaves a “free” man but soon discovers he’s still in prison as his responses to all he encounters are limited by the Ludovico technique. He is no longer able to express his out rages nor is he able to defend himself when being attacked. He soon becomes beaten and bruised finding himself taken unwittingly by the man whose home he invaded and whose wife he raped. He offers to help Alex as he had heard of the technique and thinks it’s an inhumane punishment. While taking a bath, Alex begins to sing, “Singing in the Rain” and the man begins to realize his wife’s rapist is in his house. The man calls his friends, they drug Alex, and torture him by playing Beethoven’s 9th Symphony through loud speakers.

Alex tries to commit suicide by jumping out a window, but he survives to awaken in a hospital. He soon discovers the Ludovico technique has been reversed and the Minister of the Interior visits him offering an important government job and some financial compensation on the condition he causes the government no grief over their actions. As proof of Alex being cured, the Minister of the Interior has loud speakers rolled in playing Beethoven’s 9th Symphony. Alex no longer suffers revulsion from the music. In fact, he begins seeing images of sexual pleasure to which the film ends with Alex’s words in a menacing voice over saying, "I was cured, all right!"

As mentioned earlier, the film is an indictment on the physiological quick fixes which are even more prevalent in our society than they were in 1971. There are so many pills and procedures on the market it is easy to choose what mood we’re in or how to respond to anything we don’t like in a non disturbing manner. We’ve always had this power and we don’t need a pill or anything else to exercise it. However, we do need patience and perseverance which is in very short supply thus making taking a pill all the more an attractive proposition.

Although there is an absolute need for such remedies in some cases, there seems to be a desire among those who don’t really need the remedy but only want it. It’s unrealized this has an adverse of only allowing one the emotions, thoughts, and behaviors the medication allows one to have. For instance, many who take anti depression medication often notice their sexual drive and their ability to make timely decisions are compromised. Many are also report being no longer able to respond to a volatile situation in a manner to assure their safety. These experiences are very similar to those of Alex as depicted in “A Clockwork Orange.” The film seems to herald a warning that our abilities to live life without the constraints of the drugs and procedures we volunteer for is slowly leading us to a life not worth living. Perhaps we will one day heed such a warning.

As also mentioned earlier, there were a number of protestors picketing outside The Sherman Theater during the event. I did not meet with any of protestors but I did see sentiments proclaiming a need to fear God on some of the signs. Given the history of “A Clockwork Orange” in regards to the censorship it encountered in 1971, I could only guess these protestations had to do with it. Although I respect the views of others, I do wonder why people are still upset over a film made nearly 40 years ago. Wouldn’t the religious precepts of forgiveness and tolerance help parishioners of the faith get over their distraught by now? Just wondering. You’ll find more photographs in The Forwardian Arts Society Severed Sinema 2010 Gallery at www.myspace.com/forwardian_arts.

The Next installment of The Sherman Theatre Severed Sinema Series will be on Friday April 16th at 7pm and be entitled, “Bloodthirsty Bunnies” featuring the film “Night of The Lepus,” short films submitted by Severed Sinema Fans, pictures with Evil Easter Bunny taken by Shane Izykowski, and musical guest Mad Lucas. Other future events at The Sherman Theater in Stroudsburg, PA will include “Train” on Friday March 26th, Jo Dee Messina on Thursday April 1st, their “Clash for Cash The Ultimate Battle of the Bands!” on Saturday April 10th, The “Library Alive V” on Thursday April 15th, and Carmin Appice’s SLAMM on Saturday April 17th. Please Contact The Sherman Theatre at 570-420-2808 for more information.