Honoring the Dead at The Living Room 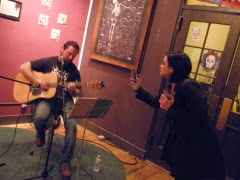 In the time of year when twilight comes earlier to one’s day, The Sherman Theater’s Living Room Gallery in Stroudsburg, PA held an Artists’ Reception Saturday November 1st for their exhibition featuring the work of local artists titled, “Day of the Dead.” The coolness of the evening air followed me into the venue but it was soon replaced by the warmth of the modestly sized gathering who arrived to partake of the art as well as the evening’s activities and offerings. These included music by guitarist Durand Louis, handmade mask whose proceeds from their sale benefit the planning of future events at the venue, shadow boxes created by Daniel Ferron, spherical bread lovingly baked by Amanda-Jean Frisella, and an altar upon which individuals were invited to paint a skull or mask for their altar in honor of those loved ones who were recently deceased.

Although the 32 pieces on display numbered considerably less than those in previous group shows (which had been known to exceed 150 pieces), the scope of imaginative interpretations of the theme embodied in the work remained undiminished. The images ranged from the macabre to those that celebrated life as a honorarium to death. In either case, the creativity found throughout the venue touched upon the spirit of the viewer who partook of it and allowed one to embrace the essentials of life and death as they became one in the same.

As conversations abounded, the evening’s co host and co curator,  Andrew Ozkenel Von Dred, took the stage to share some welcoming words along with some announcements relating to the future of The Living Room Exhibits before introducing Durand Louis to the gathering. One of these announcements were there would be no exhibition presented in December as those who plan the events will take some time to explore the possibilities to be discovered through thoughtful reflection of what has transpired throughout the years and where the venue would like to go. No details were given as everything is still in the formulation stage, but a promise was given that news will be revealed when it’s ready to be so.

It was after these words was Durand Louis introduced to the audience. With guitar in hand, the musician placed a number of original songs in the sub conscious of those who heard them. The darkened hues of his folk compositions led each listener upon journeys of wonderments as their lyrics and music created nocturnal realities upon which their shadowy dreams could build foundations upon. The music had the ability to draw one deeper into its essence until Mr. Louis ended his set with a spell binding instrumental piece that captivated the mesmeric state of the soul.

It was soon after the final notes of Durand Louis’ guitar echoed throughout the room did co host and co curator, Keyaira Lynn Von Dred take the stage to share her words of appreciation to the musician and to those who attended the evening’s event. An invitation was extended to all to purchase raffle tickets for the evening’s raffle from which prizes consisting of work created by many of the local artists who presented their work in the exhibition could be won. However, it was soon after Ms. Von Dred did my ride for the evening indicate it was time for her to leave and I bade my farewells to many of the company who I knew and moved beyond the Living Room’s door and went home.

As I walked the streets of Stroudsburg, PA on route to the car, I reflected upon the work presented in the show and the creativity that went into each piece. Although the quality of the work varied from one rendering to another, the entirety of the exhibit is well worth stopping by the gallery to take a look at. I hope to do so at a later date as the exhibit felt there was something new to be seen when peering at the details embodied in some of pieces a second time. I hope I’ll see you during my visit so we can share our discoveries together. You’ll be able to find more photographs taken during the Day of the Dead Artists’ Reception in The Living Room 2014 Gallery Part 4 at www.facebook.com/media/set/?set=a.10152489839930421.1073741902.636000420&type=1.

Day of the Dead (aka Día de Muertos) is a holiday observed throughout Mexico and around the world in other cultures focusing on gatherings designed to pray for and remember friends and family members who have died. Prior to Spanish colonization in the 16th century, the celebration took place at the beginning of summer but it was moved to the end of October to the beginning of November to coincide with the holidays instituted by The Roman Catholic Church. Traditions connected with the holiday include building private altars and honoring the deceased by bringing gifts to their grave.

The Sherman Theater’s Living Room Gallery Day of the Dead exhibition featuring the work of local artists will be on display until December 28th. The Gallery’s next exhibit will take place in January with details yet to be revealed. Please contact the gallery’s Directors and Curators, Keyaira Lynn Von Dred and Andrew Ozkenel Von Dred, at 570-421-2808 for more information.

The Sherman Theater’s Living Room is located on Main Street in Stroudsburg, PA next to The Sherman Theater who owns the building. The venue is a non-profit artspace and community hub featuring live music, performances, and other events in an intimate setting at affordable prices. Please Explore The Living Room Facebook Page at www.facebook.com/pages/The-Living-Room for more information on The Living Room, all they have to offer, and how to be a part of it all.

In addition to their exhibitions, The Sherman Theater’s Living Room presents a weekly Open Mic Nite which occurs every Sunday Evening beginning at 7pm. Musicians, Poets, Writers, and anyone who would like to share their talents with an eagerly accepting audience are welcomed to participate. There is occasionally a featured band or performer scheduled that enhances the enjoyment of the event. You can learn more about The Living Room Open Mic Nite Series on it’s Facebook Page at www.facebook.com/OpenMicAtTheLivingRoom?ref=ts&fref=ts.
Posted by Unknown at 5:10 PM