Healing Folk at The Bookhouse 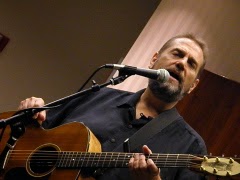 While entreating the healing energies found in music to permeate the sizable gathering of music lovers who attended, Guitarist Matt Watroba shared his gifts at The Eastern Monroe Public Library in Stroudsburg, PA on Friday September 19th which was presented as part of their 2014 Bookhouse Season. The evening began with some introductory remarks relating to the event and the library itself given by Linnae Cintron who was followed on stage by Mr. Watroba who offered his own welcoming remarks. He then proceeded to lead the audience in a harmonic exercise which created a choir of souls sharing the experience of an amazing grace.

Mr. Watroba continued his performance of folk and country selections with a voice that sang the melodies of dreams which awakened the heart to a refreshingly new state of being. Each song was a shared experience as the audience lent their voices to each composition and enhanced the essence of the piece. Stories relating to each song were delightfully spun by Mr. Watroba enhanced the sing alongs aspect of the show as an insightful understanding of the piece brought forth a relationship between the song and the audience members who were able to reflect it in their voices. The entire concert fulfilled the immortal vision of the late Folk Legend Pete Seeger who once said that his goal was not only to place a song in the ear of his listeners but upon their lips as well.

The evening was a joyous one filled with wonderful music and great storytelling in which the intricacies of the music roots were explored to the audience’s delight. The exploration proved to contain a great number of twists and turns but, as Mr. Watroba pointed out, roots tend to be quite intertwined when one pulls them out of the ground and so are the multitude of musical influences on any particular genre of music. The unraveling of these intertwining roots made the evening an even more enjoyable one. You’ll find more photographs taken during the Matt Watroba concert in The EMPL 2014 Gallery at www.facebook.com/media/set/?set=a.10152258038885421.1073741878.636000420&type=1.

Matt Watroba has performed at various venues and festivals throughout his extensive career which include the Ann Arbor Folk Festival, the Detroit 300 celebration, the Spirit of the Woods Festival, the New Jersey Folk Weekend, and Louisville’s Kentucky Music Weekend. He has often performed alongside Pete Seeger, Tom Paxton, Ramblin’ Jack Elliott, Arlo Guthrie, Shawn Colvin, Christine Lavin, Peter Yarrow, and Richard Thompson. He has also given numerous school and community presentations throughout the Great Lakes Region. Mr. Watroba has received numerous awards for his musical talents which include the Detroit Music Award for the Best Overall Folk Performer of the year 2000. He has interviewed a great number of renowned folk and country musicians on his former radio program titled, “Folks Like Us” which was broadcast on WDET-FM (Detroit, MI) for 20 years and continues to share his love for music with his listeners on WKSU www.FolkAlley.com at Kent State University. You can learn more about Matt Watroba and his music by exploring his website at www.mattwatroba.com.

The Eastern Monroe Public Library (aka The Hughes Library) Bookhouse Series takes place in the Edinger Community Room which is located on N. 9th Street (aka route 611) in Stroudsburg, PA. The Hughes Library is the main branch of the Monroe County, PA library system which includes their Pocono Township Branch in Tannersville, PA and their Smithfield’s Branch in Marshalls Creek, PA. The library offers access to numerous books, DVDs, Audio Recordings, and cultural programs free to the public. The library’s Bookhouse series is part of its cultural programming designed to provide a venue for literary and musical events which are outside of the commercial and literary mainstream. In addition to the Bookhouse concert, the work of Joyce Everitt is on display throughout the library in an exhibit presented by the Pocono Arts Council www.facebook.com/poconoartscouncil.

The next program in The Eastern Monroe Public Library 2014 Bookhouse Series will feature Sage www.facebook.com/MusicBySage on Friday October 17th beginning at 7:30pm with the doors opening at 7pm. Admission to the event is free, but donations would be gratefully accepted. Refreshments will also be available for a small charge. Please Contact Linnae Cintron at 570-421-0800 x28 or explore The Eastern Monroe Public Library Facebook Page at www.facebook.com/EasternMonroePublicLibrary?ref=ts&fref=ts to learn more information about the library, their Bookhouse series, and all the institution has to offer the community.
Posted by Unknown at 2:32 PM