Moving in the School of Arts 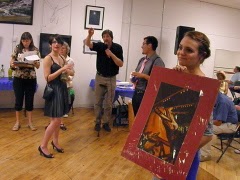 The School of Visual and Performing Arts (SVPA) in Stroudsburg, PA celebrated a Grand Reopening of their Gallery facilities with an Artists’ Reception on Saturday June 21st featuring an exhibition the incredible talents of local artists titled, “An Artistic Movement.” The evening included multicultural music performed to enhance the mood, a performance of dance along with a communal dance improvisation, and an art raffle. A large gathering filled the spacious school with the excitement of rediscovering a renewed venue to explore the arts.

A joyous vitality filled the air as the wonders inherent in the pieces presented throughout the school inspired words of adoration and delightful amazement to be shared during the numerous conversations that transpired during the course of the evening. The sounds of drumming and flute emanating from the instruments of musicians Michael G. Williams and Babakeino Anderson enhanced the mood and nature of these social intercourses. Their lively hypnotic rhythms entreated each converser to move their words gently along the concepts they sought to convey until their spoken words desired to become transcended through the communicative form of dance as evident in the swaying to and fro seen among the denizens throughout the night.

It was in the midst of the dancing chats did the gallery’s director Jody Singer take a microphone in hand in order to verbalize the school’s appreciative welcome to the multitude of art lovers who were present. He concluded his remarks with an introduction of Emiko Okamoto of The Galumpha Dance Company who performed a piece along with John Laguio titled, “Floating” which was Choreographed by one of The School of Visual and Performing Arts’ founders, Kathy Kroll. The performance was exquisite as the dancers moved their forms upon the air with the aide of draperies attached to the studio’s ceiling. The work gave each experiencer of it the sensation of flight not only inducing the physical dimensions of their forms to become uplifted but their spirits and souls as well.

The Galumpha Dance Company was formed by Andy Horowitz and Greg O’Brien in 2002 bringing to life a world of imagination, beauty, muscle, and merriment. Many of their performances include the elements of the acrobatic, physical comedy, and inventive choreography with all creating a sensory feast of images ranging from the ridiculous to the sublime. The company has received a number of awards including The Edinburgh Festival Critics’ Choice Award and The Moers International Comedy Arts Prize. Their work has been seen on a number of television shows including The Late Show with David Letterman. You can learn more about The Galumpha Dance Company by exploring their website at www.galumpha.com.

The performance concluded as conversations inspired by it consumed the studio. The effects of the performance led many to take another look at the nearly 100 pieces presented throughout the school in order to see them afresh through their newly opened eyes. The music performed by Michael G. Williams and Babakeino Anderson resumed and a deeper resonance was felt in the heart of each listener. Some time had passed until Mr. Singer took to the microphone once again to introduce Kathy Kroll who shared her welcoming sentiments with the gathering.

It was at this point did Ms. Kroll invite those who wished to participate in the Improvised Dance Demonstration to do so. It began as one participant moved onto the floor in a manner he/she felt expressive of their present state of being and to stop thus allowing another participant to follow in their aesthetic footsteps until the were moved to become motionless and thereby inspiring another participant to follow him/her. This continued until the nearly 30 participants who consisted of those among the gathering who proved to be slightly more adventurous than the rest took their creative place upon the floor. They were then guided to movements by Ms. Kroll of which they did so by incorporating their own individualized interpretation to the suggestion. The entirety of the demonstration brought both an outer and inner smile to those who witnessed it enhancing the perception of their own creative abilities.

It was some time after the demonstration did the evening’s raffle take place. Shane Izykowski took the microphone to echo the sentiments expressed through the conversations that permeated the evening regarding the high caliber of quality and creativity found in the work presented upon the school’s walls as well as the thoroughly inspiring performances shared throughout the evening. It was then when members of the gathering were invited to come forth in order to pick numbered ticket from the cups that were placed before the creative endeavors some of the artists who participated in the exhibit donated for the raffle whose proceeds benefited the school and all it has to offer the community. An anticipatory excitement rose to fever pitch as each number was called until the final digit ignited a cry of ecstasy from the individual who held the winning ticket.

It was after the final number of the final ticket was called and the corresponding piece collected did the evening begin its journey toward its conclusion. However, the journey’s end led to another beginning as those who slowly left the school shared the desire to return in order to explore the work during its business hours and to explore their creativity by enrolling in the educational opportunities the facility has offer. The evening proved to be a wonderful Grand Reopening event as it not only re introduced the school to the creative community but it also reopened the hearts of those who love the arts so they could experience it through even wider horizons. You’ll find more photographs taken during the Artists’ Reception in The SVPA 2014 Gallery at www.facebook.com/media/set/?set=a.10152519973960421.1073741905.636000420&type=1.

The School of Visual and Performing Arts is located in Stroudsburg, PA and has been instrumental in the creative development of its students for over 20 years. The facility holds classes in dance, ballet, and movement led by Diane Verdi, Paul Heeschen, and Kathy Kroll as well as classes in the theater arts led by Jazmin Ospa and Shelie Bransford. The school also offers a number of workshops with each focusing on a number of creative disciplines. You can learn more about The School of Visual and Performing Arts by exploring their Website at www.schoolofvisualandperformingarts.org.

The exhibition titled, “An Artistic Movement” will be on display in The School of Visual and Performing Arts until July 12th. Their next exhibit is titled, “Loops and Hoops” and an Artists’ Reception is scheduled for Saturday July 19th beginning at 6pm. All area artists are welcomed to participate by placing their work related to the theme in the exhibit.  The drop off dates are July 10th and 11th. Please contact Jody Singer at mountainsidearts@hotmail.com for more information.
Posted by Unknown at 2:18 PM