Sharing a Launch with TVPocono 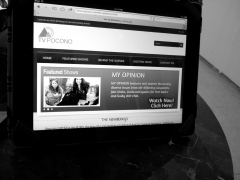 The SOHO in the BURG art gallery in Stroudsburg, PA hosted a Launch Party to celebrate the commencement of a new online television (aka webivison) station called, “TVPOCONO” on Friday June 7th. It was a well attended affair filled with the excitement associated with such innovative ventures. This was enhanced by the food prepared on site by Chef Warren. You’ll find more photographs taken during the Launch Party in the Stroudsburg Art District 2013 Gallery at www.facebook.com/media/set/?set=a.10151420282390421.539464.636000420&type=1.

The new “webivison” station is the brainchild of Bridget Williams who is also the owner of Shoppes on Main which is a boutique located in Stroudsburg, PA featuring a variety of upscale merchandise presented by a number of vendors. Although the station is in its infancy, several programs are already available to be viewed online at anytime those who visit the website chooses to do so. They include a talk show titled, “MY OPINION” consisting of co hosts chatting about a number of topics and the original soap opera titled, “The Newberrys.” Both programs are recorded at The SOHO in the BURG.

Unfortunately, some technical difficulties with the computer available at the Launch Party kept those attending the event from viewing the programs the station broadcasts. However, I visited the website in my own computer soon after the party and found a number of shows are indeed available catering to an upscale predominantly female audience. Still, as mentioned earlier, the station is in its infancy as it was noted they are seeking ideas for shows to be added to their programming schedule. This bit of sharing led me to eagerly anticipate a variety of future programs to be enjoyed by a more diverse audience. You learn more about TVPOCONO, view their programs, and learn how you can become a part of the station’s future by visiting their website at www.tvpocono.com or by exploring their Facebook Page at www.facebook.com/pages/TVPoconocom-Your-source-for-innovative-and-fun-programs/104220372560.

SOHO in the BURG in Stroudsburg, PA is an extension of the Backstreet Studio and Art Gallerie which opened its doors to the public in April of 2012. In addition to serving as a studio from which many of TVPocono programs are recorded, the gallery is presently presenting the “Farm Field Forest” exhibition featuring the work of Patricia A. Griffin which will continue to be on display until July 21st. An Artist’s Talk will be given by Ms. Griffin at the Gallery on Saturday July 6th at 4pm. The next exhibition presented at the Gallery will be their Water Show which welcomes artists to submit their work depicting Boats, Bridges, Beaches, or any subject relating to water. The Artists’ Reception is scheduled to take place Saturday August 3rd beginning at 4pm and will continue to be displayed at the Gallery until September 16th. You can learn more about SOHO in the BURG and all their creative endeavors by exploring their Facebook Page at www.facebook.com/BackstreetStudioAndArtGallerie.
Posted by Unknown at 3:44 PM