Dutot Down the River (The River) 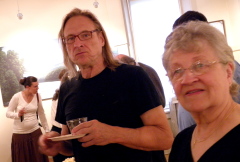 The Antoine Dutot Museum and Gallery in Delaware Water Gap, PA held an Artists’ Reception on Friday June 14th for “The Riv10 - The Delaware River - A Big Picture” Exhibition featuring the work of a variety of artists. The exhibition is an annual event inviting area artists to share their unique vision and interpretation of the Delaware River which runs from the town of Jefferson, NY into the Delaware Bay near Philadelphia, PA before entering the Atlantic ocean. It is the largest river near the eastern coastline of the United States.

A sizable gathering of art lovers flowed into the gallery and were soon engulfed by the overwhelming sense of serenity embedded in the majority of the works presented in the display. This was a welcomed sensation for those who hectically paddle through their lives and, in their weariness, embrace any and every opportunity to row their boats gently down a stream. The exhibition and the congenial conversation it inspired among attendees encouraged many to forgo the everyday rushes and to merrily place their lives in perspective since, after all, life is but a dream.

As mentioned earlier, a number of artists participated in the exhibit which was echoed by the varied approach each artist pursued while utilizing the show’s theme in their creative endeavors. This also was reflected in the medium each artist utilized giving their particular piece a distinct flavor to it. This distinctiveness related well with the show’s theme as The Delaware River is a multifaceted river which is not only characterized by its ebbs and flows but by the people who live near its banks.

Those who have lived in sight of the river often marvel at its mighty beauty and find a solace whenever they take pause to contemplate it. However, there are also times when fear touch the hearts of those who reside within the water’s reach as a number of life threatening floods has been a part of their histories. Still, in living with both the calm beauty and the raging desolations The Delaware River is capable of, a love for the river remains in many hearts.

Although the overall quality of the work presented in the exhibition was very good, one individual and his endeavors stood out to become designated as the exhibit’s featured artist. The work titled, “Delaware River, July 16, 2006” illustrates its creator’s, Will Rothfuss, impressive aptitude with the medium of oil painting through both the physical size of the piece and the precise definition of the images presented on the canvas. Many, including myself, had to be reminded the work was not a photograph but was a painting. Those of us who were amazed and wanted our doubts reassuringly dispelled were able to do so only after a close examination of the work revealed the brushstrokes Mr. Rothfuss employed while creating the piece. Cool.

The Artists’ Reception for The Riv10 - The Delaware River - A Big Picture exhibition was an enjoyable one with art and conversation pleasing to the senses. The experience embodied in the reception encouraged many to slow one’s pace to view the river and perhaps everything we encounter in life with a new, refreshed perspective. You’ll find more photographs taken during the Reception in The Dutot 2013 Gallery at www.facebook.com/media/set/?set=a.10151703218890421.1073741837.636000420&type=1.

The exhibition’s featured artist, Will Rothfuss, received an A. B. (Artium Baccalaureatus aka Bachelor's in Arts) Degree from Cornell University in Theatre and Art and studied at The Art Students’ League in NYC where he received a Merit Scholarship. Mr. Rothfuss has shown his work in numerous galleries throughout the United States and has been awarded several prizes in recognition of his talent. Mr. Rothfuss also works as a freelance set designer in both television and in theater. You can view images presented in previous The Delaware River - A Big Picture exhibitions at www.iriv.wordpress.com/riv-show.

The Antoine Dutot Museum and Gallery originated as a brick school house built c. 1850 by Antoine Dutot who founded the town of Dutotsville before it was renamed to Delaware Water Gap, PA. In addition to the exhibitions presented at the gallery, the museum offers tours and educational opportunities for those who would like to learn more about the area. The current exhibition titled, “The Riv10 - The Delaware River - A Big Picture” will be on display at the gallery until June 30th. Their next exhibition will feature the work of Tina Madonia beginning with an Artists’ Reception on Friday July 5th and will continue to be displayed until July 21st. Please Explore The Antoine Dutot Museum and Gallery Facebook Page at www.facebook.com/DutotMuseumAndGallery?fref=ts for more information.
Posted by Unknown at 1:08 PM