Opening a Mic for A New Year 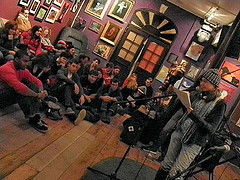 Just as the renewing energies of a new year brings about a new series of memorable moments in our lives, so does the continuation of The Living Room’s weekly Open Mic Nite Series which has provided a great number of musicians, poets, comedians, and other performers an opportunity to explore and enhance their talents before an enthusiastically supportive audience. The Sunday January 6th installment of the series proved to be no exception to this remarkable phenomenon which is enjoyed by multitudes of friends who come to the venue every week to enjoy the offerings placed before them. This combined with the warm and welcoming atmosphere one consistently encounters every time one enters makes The Living Room in Stroudsburg, PA a home for all who venture in.

Those among the many who returned to The Living Room as part of their celebration of the arrival of 2013 discovered some additions introduced to the venue to help make their visit all the more enjoyable. These included a coffee maker percolating fresh coffee free (donation accepted) for those who desired some additional warmth during the Winter season or for those who merely like the taste of the beverage. I’m not a coffee drinker but was pleased to be reminded how considerate those who organize the Open Mic Nights are to those who frequent them. There were creamers and other condiments to accompany the coffee and I was somewhat amused to see a spoon with a note associated with it saying, “Do Not Lick.” I smiled as thoughts of Alice’s Adventures in Wonderland came to my thoughts.

In addition to the coffee offered to visitors of The Living Room’s Open Mic Nites, there were a variety of snacks presented in large portions for sale at a dollar each. From Krispie Treats to Cookies, appetites were whetted as a number of attendees began to bite into the tasty cuisine. However, for those who sought to be intellectually fed as well as physically, a new “Take a book, Leave a book” service was introduced during the January 6th Open Mic Nite in which anyone can exchange a book they have read for one they are eager to explore. There is also an option of which one could pick out a book and read it while visiting the venue whenever its doors are open.

As those who came to The Living Room were becoming acquainted with its new offerings, the evening’s host and his guitar took their place before the mic in order to welcome performers and experiences alike to the festivities. Billy Mack’s friendly words and songs filled the room and the hearts of those who heard them establishing a mood that prevailed throughout the evening. As Billy finished his introductory set, he announced he would be away touring for a while and won’t be able to attend the January 13th and 20th Open Mic Nites. However, they will continue under the guidance of Jesse Roth who is often seen assisting Billy in the many tasks performed to assure the event runs smoothly and has presented her meaningful poetic work to the audience in previous gatherings.

After Billy concluded his welcoming remarks and performance, the guitarist known as C. O. G. took the stage. His renditions of classic tunes were quietly echoed by the voices of those whose memories were filled with the song and the nostalgic moments that accompanied them. Unexpectedly, a friend of C. O. G. named Bob entered through the Living Room’s doors and was immediately asked by the performer to join him in song. In keeping with the open nature of the venue, he did so and together they created a moment which was greatly appreciated by all who were touched by it. C. O. G. and Bob were followed by electric guitarist Matt B.

Matt has become a welcomed regular to those who frequent the Open Mic Nites as they enjoy his riffs and chord changes to established and original compositions alike. This night was no exception. Matt was followed by another electric guitarist who presence has also become a regular one in The Living Room. David Pugh never fails to add new life to the classic tunes he interprets for the event in which he deftly mixes his own stylings into each piece. David was followed by a young woman named, “Abi” who was a new comer to the mic. She and her guitar hauntingly shared the music which were known to many but did so by revealing aspects of each piece until the previously unknowable whole came into the awareness of our soul’s heart.

Abi was followed by Poet Amy Burowski whose words touched those who were fortunate enough to attend previous Open Mic Nites but those who experienced her work as well as those joining the gathering for the first time were greeted with new imagery and concepts which enhanced the meaning and perceptions of all who listened to them with their being. Amy was followed by a Guitarist named Cathy who had performed before the gathering previously and was welcomed back as her performance brought smiles to the ears that listened.

Cathy was followed by a duet of guitarists consisting of musicians Jesse and Theo. Jesse was a new presence to those who have frequent the Living Room but Theo (aka Sunny Shading) was well known as he once performed as the featured musician during a previous event. Together, their lively styles combined to create a joyous atmosphere filled with clapping of hands, snapping of fingers, and stomping of feet. The delightfully infectious joy found throughout the room reflected that found in that injected into them through the performers’ syringe of laughter and camaraderie.

As Jesse and Theo completed their set, the environment they created was furthered by a trio of musicians known as Travis, John, and Aaron. They performed lively versions of popular tunes on a mixture of instruments which included guitars, banjos, and mandolins. Earlier, it was announced there would be no featured performer as unexpected scheduling conflicts on their part prohibited their arrival. However, the performance given by Travis, John, and Aaron bought to mind any of the evening’s performers could have well served as a featured performance and it’s hoped some will be considered to appear in future Open Mic Nites.

Travis, John, and Aaron were followed by guitarist Nick Desouza whose songs brought some thoughtful smiles to the room. He was eventfully joined by Jesse who performed earlier with Theo (aka Sunny Shading). They were followed by Wilbium who performed in the Living Room several previous times which included as a featured performer. His electronic music moved the gathering with its beats leading many to dance along with every measure. Wilbium was followed by a guitarist know simply as “Dom” whose renditions of familiar songs pleased the crowd.

The final performer signed in for the evening was a guitarist known simply as Liz. Liz has been seen performing in previous venues both as a soloist as well as accompanying others but made her debut in the Living Room that night. Her strong earthy voice resonated with the essence of womanhood while her appearance and demeanor inspires one to imagine who would emerge if Dianna Rigg (best known for her role of Mrs. Emma Peel in “The Avengers” Television Series) and Lucy Liu were somehow magically combined. It would probably be her.

The absence of a featured performer allowed for some extra time in the schedule in which a waiting list could be established. This provided an opportunity for those who have enjoyed the offerings thus far to continue their experience and those who wish to share their talent were able to do so as well. Some members of the gathering began to feel a sense of exhaustion from the energetic experiences they had partaken in and began to leave. However, for those who remained, the waiting list proved to be a worth waiting for list as the night continued.

The first upon the waiting list to perform was a duo of young female guitarist named, Natalie and Kaila. Together their harmonies blended with their instruments into one overpowering voice. At one notable point, one of the performers reached into the air while singing her song as if she was touching the divine source of the composition in order to take it into her bosom before tossing it out to be caught by the mitts of listeners who eagerly awaited its ethereal arrival. Natalie and Kaila were followed by guitarist Mike Quinn whose music pleased the remaining audience.

He was followed by Jesse who performed previously with both Theo (aka Sunny Shading) and Nick Desouza but ended the evening performing as a soloist. Since many had left prior to his performance, the number of listeners who heard him were diminished. But, the expression of love and appreciation for his endeavors were not. He continued on just as those who frequent the Living Room’s Open Mic Nite continues on with the enthusiasm of knowing there is something wonderful to be experienced whenever one open its doors to enter in. You’ll be able to find more photographs taken during the Sunday January 6th Open Mic Nite in The Living Room 2013 at www.facebook.com/media/set/?set=a.10151402355470421.537393.636000420&type=3.

The next installment of the Living Room Open Mic Nite series will take place on Sunday January 13th beginning at 7pm (sign up begins at 6:30pm). Musicians, poets, writers, and anyone who would like to share something with an audience are welcomed to do so. You can learn more about The Living Room Open Mic Nite Series by Exploring their Facebook Page at www.facebook.com/OpenMicAtTheLivingRoom.

In addition to the Open Mic Nites presented at The Living Room, the venue also holds a Gallery which is currently presenting a group exhibition titled, “The For the Love of the Art” featuring the work of area artists. The exhibition continues until January 30th. Their February exhibition will feature four selected artists with an Artists’ Reception Scheduled for  Saturday February 2nd from 6-10pm. The theme for the evening will provide an opportunity for those who attend to relive their Prom Night. The exhibition will continue until February 28th.

The Living Room opened in April of 2012 and is located on Main Street in Stroudsburg, PA next to The Sherman Theater who owns the building. The Living Room is organized by members if the community who include Shane Izykowski, Martelle Jones, Elisa Byrne, Tom LeFevre, Darlene Farris Labar, Sarah Bouma, Toby Sabatine, and Billy Mack. Please Explore The Living Room Facebook Page at www.facebook.com/pages/The-Living-Room/123978921059378 for more information on The Living Room, all they have to offer, and how to be a part of it all.
Posted by Unknown at 2:52 PM