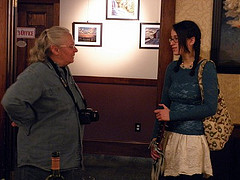 The Forwardian Arts Society held an Artists’ Reception on Saturday January 19th for their Forwardian Cover Exhibition which was hosted by The Sarah Street Grill (upstairs) Artspace in Stroudsburg, PA. The exhibition served to honor the artists and photographers whose work appeared on the front and back covers of The Forwardian Arts Society’s Literary and Arts Magazine titled, “Forwardian” since it began publication in 2010. A modest number of art lovers attended the afternoon event and were greeted by a variety of work which not only reflected the quality of the images associated with the magazine but also found themselves delving into the imaginative scenes depicted in each piece.

As the afternoon continued, these exploratory conversations gave pause as the event’s musical guest began to play her soft siren’s song. Ms. Crystal Rose and her guitar brought a much richer meaning to songs already established by other artists. However, the presentation of her original work from her upcoming CD titled, “Sunrise Musings” inspired those who felt an admiration of her acoustic renditions to fall into a deep silence as the cadence of each lyric and measure spoke in a quiet language that only the spirit can fully understand. Ms. Rose performs in several venues throughout Monroe County, PA including the Sunday evening Open Mic Nites held at The Living Room in Stroudsburg, PA. You can partake of samples of Ms. Rose’s incredible talent at www.soundcloud.com/crystal-rose-13, www.astralfilledsky.tumblr.com, and www.youtube.com/user/astralfilledsky?feature=mhee.

The afternoon proved to be an enjoyable one filled with art, music, and conversation from which endearing memories are formed. The exhibition began on Saturday January 5th and will continue being presented at The Sarah Street Artspace in Stroudsburg, PA until February 28th. You’ll find more photographs taken during the Artists’ Reception in The Forwardian Arts Society 2013 Gallery at www.facebook.com/media/set/?set=a.10151421648390421.539635.636000420&type=1.

The Forwardian Arts Society is a fellowship for people who love the arts seeking to support and encourage creative individuals and groups as they go forward toward their dreams. The group does this through their website and popular social networks by posting articles and images of the art related events they experience, sharing information about art related events, opportunities, and educational experiences with the public, and inviting art lovers to participate in events they create such as their Forwardian Film Festival, Forwardian Music and Art festivals, and their literary and arts magazine titled, “Forwardian.”

“Forwardian” was created with the desire to provide artists, photographers, writers, and poets an avenue to express their creativity. Since its debut publication in May 2010, it has gained a reputation for presenting meaningful poetry, engaging stories, and captivating images of the highest caliber. The managerial staff includes Sarah Jane McCready who serves as the magazine’s Editor in Chief, Alexa Carpenter who serves as its Poetry and Literary Editor, Chris Sullivan who serves as its Assistant Poetry and Literary Editor, Andrea Robbins-Rimberg who serves as its Art and Photography Editor, and Paul Adam Smeltz who serves as the magazine’s Publisher. You can learn more about The Forwardian Arts Society, its literary and arts magazine, and all they offer to the creative community by exploring their website at www.theforwardianartssociety.com or by visiting their Facebook Page at www.facebook.com/pages/The-Forwardian-Arts-Society/91146283760.
Posted by Unknown at 3:35 PM