Springtime for Gershwin at ESU 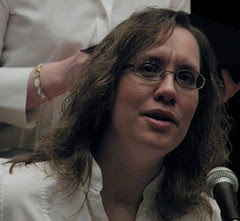 The East Stroudsburg University (ESU) of PA presented their Music Department’s Spring Choral Concert titled, “A Gershwin Portrait” under the direction of Dr. James Maroney on Wednesday April 27th in The Cecilia S. Cohen Recital Hall which is located within the Campus‘ Fine and Performing Arts Building. The concert featured the ESU A Cappella Ensemble, their Concert Choir which consists of both University Students and members of the community, and a small orchestra comprised of musicians well known for their considerable talents.

The recital hall was nearly filled to capacity when the ESU A Capella Ensemble took the stage. Their combined voices created a soulful harmony on which each audience member could linger long after the performance came to its conclusion. The Ensemble’s performance was followed by the Concert Choir whose blend of voices transcended even the those who came before allowing each concert attendee to appreciate the art of music and all it can inspire even more. It wasn’t long before the evening’s musicians entered the recital hall to lend their instruments to the vocals in order to present the selections composed by George and Ira Gershwin. These selections were presented in six sections.

Although there were many wonderful voices that contributed to the performance, they are too many to record in this article. However, there were a number of soloist and duals who lent their voices to the evening and they should be noted here. They are Danielle Tretola, Deanna Knapp, Janay Keys, Robert Wehe David Yablonski, Dawn Krautter, Patrick Mertz, Susan C. Prtune, Lauris Braman, Krista Montgomery, and Hillary Beal.

As mentioned earlier, the small orchestra comprised of musicians known for their considerable talents. They were Pat Turner on Flute, Clarinet, and Tenor Sax, Danny Sahn and Patrick Dorian on Trumpet, Jim Daniels on Trombone, Paul Rostock on Bass, Bob D’Aversa on Drums, and Pauline Fox (who also served as the Choir’s Accompanist) on Piano. The music they created to accompany the singers enhanced the program which led the audience to their feet at it’s conclusion. You’ll find more photographs taken during the concert in The Music 2011 Gallery at www.facebook.com/forwardian.dude.

The ESU Spring Choral Concert was the final one for the 2011 Spring Semester. Other music related presentations for the remainder of the semester to be performed in The Cecilia S. Cohen Recital Hall includes The Pocono Flute Society Concert on Saturday April 30th at 7pm and The 24th Annual Spring Band Concert on Sunday May 1st at 7pm featuring The University/Community Concert Band as directed by Otis French and The University Percussion Ensemble as directed by Jim Wilson. The Student Voice Recitals featuring the Students of James Maroney and Wendy Grice will take place Tuesday May 3rd and 6th at 7:30pm.

The ESU Concert Choir invites all students, faculty, and staff along with community members who love the art of music and our like to perform in their 2011 Fall Semester Concert to join them. The rehearsals will begin Tuesday August 30th at 7:15pm. The Semester’s Concert is scheduled to take place Wednesday December 7th. Please Contact The ESU Music Department at 570-422-3483 for more information.
Posted by Unknown at 2:54 PM