Films Fit for a Forwardian 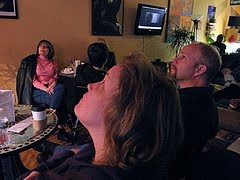 On a seasonally warm Spring day, The Forwardian Arts Society held their 1st Annual Forwardian Film Festival at The Cheeky Monkey Coffeehouse in Stroudsburg, PA on Friday April 15th.. The event featured five short films showcasing the talents of local filmmakers and actors and was greeted by a vast number of film lovers who came to enjoy the works and the meaningful conversations they would inspire. The evening would end with a deeper appreciation of the skills and techniques a filmmaker must employ to manifest their cinematic dreams.

After a few welcoming remarks, the festival began with a screening of “Misty Mountain” which is a science fiction piece from Denmark dealing with time travel. It starred local actor Bob Walz who was present during the festival. The film had the ability to draw many who experienced into the world it created which moved from the past to the present in unique ways. The enjoyment of this film was enhanced by the insights of its creation provided by Bob himself.

The second film was titled, “The Lottery” which was based on a short story written by Shirley Jackson. It was published in “The New Yorker” magazine in 1948 and received a very negative response due to its controversial themes. This response was so profound, readers canceled their subscription and the story was banned in the Union of South Africa. Since then, it has been accepted as a classic short story while being taught in schools as an example of what a short story is capable of accomplishing in the literary world. Again, Bob Walz, who appeared in the film, lent some insights to how the film was made.

The third film was titled, “lucky” and was filmed as a theatrically staged drama featuring three characters who were a little bit on the criminally shady side. This character driven piece captivated the audience with its dialogue and it’s filming techniques. Again, Bob Walz, who appeared in the film, lent some insights to how the film was made.

The forth film was titled, “Battle of the Bedpan.” As its title suggests, this was a comedy about an elderly man who wages a battle with his home care nurse. This leads to some very funny antics inspiring some light hearted chuckles from the audience. Again, Bob Walz, who appeared in the film, lent some insights to how the film was made.

The film was followed by a brief intermission which allowed the audience to partake of the many delicious beverages The Cheeky Monkey has to offer while commenting on the sinfully satisfying cookies the establishment offered as a complimentary treat to be enjoyed while watching the films. The Cheeky Monkey also provided an opportunity for the participants to support the publication of The Forwardian Arts Society’s Literary and Arts Magazine titled, “Forwardian” though a raffle with prizes donated by the establishment. This proved to be a very joyous and unexpected addition to the festival as those in attendance gleefully took advantage of the opportunity.

The final film shown during the festival as titled, “Spill” and starred Joseph Paul Carnevale who appears at The Cheeky Monkey during its monthly Comedy Night featuring the Off Track Players. The film was a comedy about a janitor who learns of an art competition and decides to participate when he also learns there is no experience necessary. The film reveals he not only is lacking any artistic experience but he is also lacking the tools and equipment he needs to create his work of art. This leads to an amusing process as he endeavors to manifest his masterpiece using the objects that are readily available to him. Other than the music on it’s sound track, the film was presented in silence. Many have commented on how this aspect of the film communicated its ideas more effectively than if there were any spoken words employed. Luckily, Joseph was present during the festival to share his experiences with the audience.

The screenings was followed by a discussion in which conversations led to friendships and a deeper love for the art of film. The winners of the raffle were also selected and the prizes were awarded. The festival ended with many words of appreciation and news of The Forwardian Arts Society’s upcoming monthly Film Lovers Gatherings. The next one is scheduled for Friday May 20th at 7pm and all film lovers are welcomed to attend this free event. The film shown will be selected from those suggested by the festival’s attendees and will be announced at a later date. You’ll find more photographs taken during The First Forwardian Film Festival in The Forwardian Arts Society 2011 Gallery at www.facebook.com/forwardian.dude.

The next event held at The Cheeky Monkey will be an Artist’s Reception featuring the work of David Ohkerling held on Friday May 6th beginning at 6pm. This Exhibition will continue until June 30th. Other future events at The Cheeky Monkey include their Open Mic Night taking place every Tuesday evening, The “Just Say It: A Spoken Word Symposium” events taking place every Thursday evening, their comedy night featuring the Off Track Players on Friday May 27th, and The Urban Mountain Voices’ Youth Open Mic Night on Saturday May 20th. The Cheeky Monkey Coffeehouse offers a variety of coffee, drinks, and culinary treats along with events such as the one described in this article. Please Explore The Cheeky Monkey Coffeehouse Website at www.cheekymonkeycoffee.com or call 570-420-8222 for more information.