An Incubus Grows In Stroudsburg 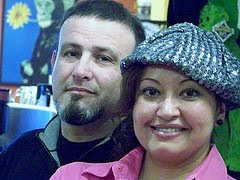 The Forwardian Arts Society held their final Film Lovers’ Gathering for 2010 at The Cheeky Monkey Coffeehouse in Stroudsburg, PA on Friday November 19th. The event included a free screening of the film, “Incubus” (aka Inkubo). Although the attendance was very low, the gathering was an enjoyable experience.

“Incubus” (aka Inkubo) was made in 1965 and was shown in subtitles with it’s dialogue spoken in Esperanto which was created in 1887 by Dr. Ludovic Lazarus Zamenhof who was a Russian-Jewish ophthalmologist. The language was constructed in order to foster harmony between people from different countries. This didn’t quite happen, but some primary schools teach it as preparation for learning other foreign languages.

The film was directed by Leslie Stevens who created The Outer Limits television series in 1963 and starred William Shatner shortly before he began working on the Star Trek Series in 1966. The film’s premiere took place at the San Francisco Film Festival in 1966 because many of the attendees were prone watching films with subtitles. However, several Esperanto enthusiasts "screamed and laughed" at the actors' poor pronunciation of the language and the filmmakers were unable to find distribution for the film except in France. The film was considered lost in a fire until a very deteriorated version was found and restored in 2001. Due to numerous hardships visited upon many members of the cast, the film was considered cursed.

These hardships include the actor who played the Incubus killing his girlfriend, Barbara Ann Thomason Rooney (the estranged fifth wife of Mickey Rooney) and himself in 1966, an actress committing suicide less than a year after the film wrapped, the daughter of another actress was kidnapped and murdered, and the director’s production company (Daystar Productions) went bankrupt. Even the success William Shatner found through his portrayal of Captain Kirk left him typecast to the character leaving his subsequent career somewhat lacking. The one notable exception to the curse would be of film’s cinematographer Conrad Hall whose work on the films “Butch Cassidy and the Sundance Kid,” “American Beauty,” and “Road to Perdition” won him Academy Awards.

The film is about a solder (played by William Shatner) who returns from war as a wounded hero. He and his sister comes to the village of Nomen Tuum which has a well that can heal the sick. The well also has cosmetic effects which can make people more beautiful. This quality of the well attracts many vain individuals and this attracts some succubi (agents of the God of Darkness) who lead them to their deaths in order to send their souls to Hell. All is working well for the succubi until one becomes ambitious and tires of easy prey.

She yearn for the desire to turn a pure soul over to their master and embarks upon doing so with the William Shatner Character in spite of warnings of her sister succubi. Her insistence leads her to the cottage the soldier and his sister lives and, after a cordial get together during a solar eclipse, she lures him away to tempt him from his purity while his sister goes blind while watching the celestial event through her naked eyes. It is during her temptations, the vain succubus becomes overwhelmed by her prey’s innocence and falls in love with him.

This is seen as a spiritual violation by the succubus and her sister tantamount to rape. The sisters summon their brother (The Incubus) from the depths of Hell to help them exact their revenge. They do so by luring the soldier’s sister into their unholy dwelling in which the Incubus rapes her in a Satanic wedding ritual. The violated succubus then embarks on exacting her revenge directly upon the soldier by creating the stage for him to discover his sister’s rape and killing her brother (The Incubus) thus tarnishing his soul with the sin of murder making it easier to send him to Hell.

This goes as planed until the soldier (dieing from his wounds gained in battle with the Incubus) become so filled with remorse for his deed that he devotes his soul to God in order to become redeemed and falls to the floor of a church he enters. Although she is unable to enter the church. The soldier’s actions lead the succubus to fall in love with him again. Her brother (The Incubus) turns into a goat and attacks her. She survives by proclaiming her soul now belongs to God and the film ends with her crawling into the church to grasps the soldier’s hand.

As mentioned earlier, the gathering wasn’t well attended, but the film was an enjoyable one to watch. It was fun to watch William Shatner speak in Esperanto which made one wonder if everything he does would be better with subtitles. As also eluded to earlier, film’s cinematography was beautifully shot which allowed it to transcend the qualities of the script and acting which were sometime lacking. It was pleasantly surprising how well the film looked while remembering all the physical damage it received prior to its restoration.

The Forwardian Arts Society is a fellowship for people who love the arts seeking to enhance the creative community by encouraging those interested in the arts to go forward toward their dreams, by supporting those groups and individuals who are manifesting their dreams through performances and/or presentations, and by loving them and all they do. Please Explore The Forwardian Arts Society Website at www.theforwardianartssociety.com for more information about the fellowship and all it has to offer.

The Next Film Lovers’ Gathering of The Forwardian Arts Society will take place in April 2011 when our active season for gatherings and other events resume. It is hoped we’ll begin our season with some original worked created by some local filmmakers. More details about this and how filmmakers can participate will be shared later.

In addition to The Forwardian Arts Society Gatherings, The Cheeky Monkey Coffeehouse offers a variety of coffee, drinks, and culinary treats along with other events for the public to enjoy. These include their exhibition being shown until December 12th to benefit the "Thrive to Survive" Foundation in their research for cancer cures and treatments, a Comedy Night scheduled for Friday December 3rd beginning at 7pm and their “Just Say It: A Spoken Word Symposium” events which take place every Thursday evening at 7pm. Please Explore The Cheeky Monkey Coffeehouse Website at www.cheekymonkeycoffee.com or Call 570-420-8222 for more information.
Posted by Unknown at 3:05 PM