A Bluegrass Coffeehouse with Jim Hurst 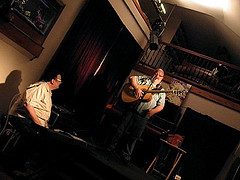 The ArtMusic Coffeehouse in East Stroudsburg, PA brought the down-home flavor of bluegrass music to the abode of Don Slepian and his wife Jan Julia on Saturday August 18th as they presented guitarist Jim Hurst to their guests. Long time friends and newcomers came through the door as eager to partake of its welcoming atmosphere as they were to enjoy the music. The couple greeted the attendees as did the carousel horses who overlooked the performance area. It’s been a while since I’ve attended the concert series and it was great to be back.

Conversations were abound consisting of catching up on congenial topics and sharing memories of concerts presented in the past until Don took his place behind his keyboard, sounded chimes to summon the harmonious spirits, and welcomed the audience in his living room as well as those who were experiencing the concert through their Live Video Webcast. It was soon afterwards did Don begin his customary musical introduction to the concert.

These musical introductions serve to bring alignment to those who listen by providing and opportunity to leave the cares and worries many encounter in their lives to the care of the melodies they experience through the improvised compositions performed by Don. As the introduction concluded, Jim Hurst slowly took the stage expressing a condition reflecting that of the audience of how the soothing effects of the music nearly led him to sleep. However, it was soon after Mr. Hurst’s own performance begun, did the spirit and style of Bluegrass Music rouse even the sleepiest toe to tap to its rhythm and laughter.

The songs ranged from the 19th century ballad “Banks of the Ohio” which is best remembered by being performed by The Carter Family to “Both Sides, Now” written by Joni Mitchell and later performed by Judy Collins. The performance also included several original compositions which compared favorably to those written by well established artists. Mr. Hurst’s pieces brought smiles, laughter, and silent contemplation as the stories and sentiments of each song was revealed.

Regardless of the source of the song Mr. Hurst performed, the underlining thread of the concert was his skill with his instrument and his powerful voice which were wove together into one fine fabric. His Kentuckian accent lent an authenticity to much of the work providing a sense the experiences depicted in the song were his own. While this conjecture is obviously true in his original compositions, his renditions of other works placed him squarely in the midst of the songs and thus made them his own.

The performance concluded with a duet performance featuring Don Slepian and Mr. Hurst belting out the song “Mustang Sally” which was written by Mack Rice in 1965 and performed by Wilson Pickett the following year. It was a fun and satisfying end to an evening inspiring everyone to take heed to the words, “Ride Sally Ride” whether their names were Sally or not. You’ll find more photographs taken during the Jim Hurst concert at The ArtMusic Coffeehouse 2012 Gallery at www.facebook.com/media/set/?set=a.10150717195285421.457027.636000420&type=1&l=f497305bbb.

Jim Hurst came from a musical family and cites his musical influenced from the works of Tony Rice, Clarence White, and Jerry Reed. He appeared on  television and radio while touring with Trisha Yearwood. Jim Hurst later joined Grammy-nominated Claire Lynch and “The Front Porch String Band” in 1995 and formed the duet known as “Jim Hurst and Missy Raines” receiving the IBMA Guitar and Bass Player of the Year Award for 2001 and 2002. Jim Hurst began his solo career in 2010 and performs his show full time along with teaching at guitar workshops and music camps in North America and Europe. His 4th CD titled, “Intrepid” is available online. You can learn more about Jim Hurst, his future appearances, and how to obtain a copy of his CDs by Exploring his Facebook Page at www.facebook.com/JimHurstFanPage.

The ArtMusic Coffeehouse is held in the home of Don Slepian and Jan Julia who reside in the borough of East Stroudsburg, PA as part of the Concerts In Your Home Series. A variety of musical forms are presented including folk, jazz, classical, and electronic music. The ArtMusic Coffeehouse now offers those who have access to the internet an opportunity to experience their concerts online and participate in their chat room.