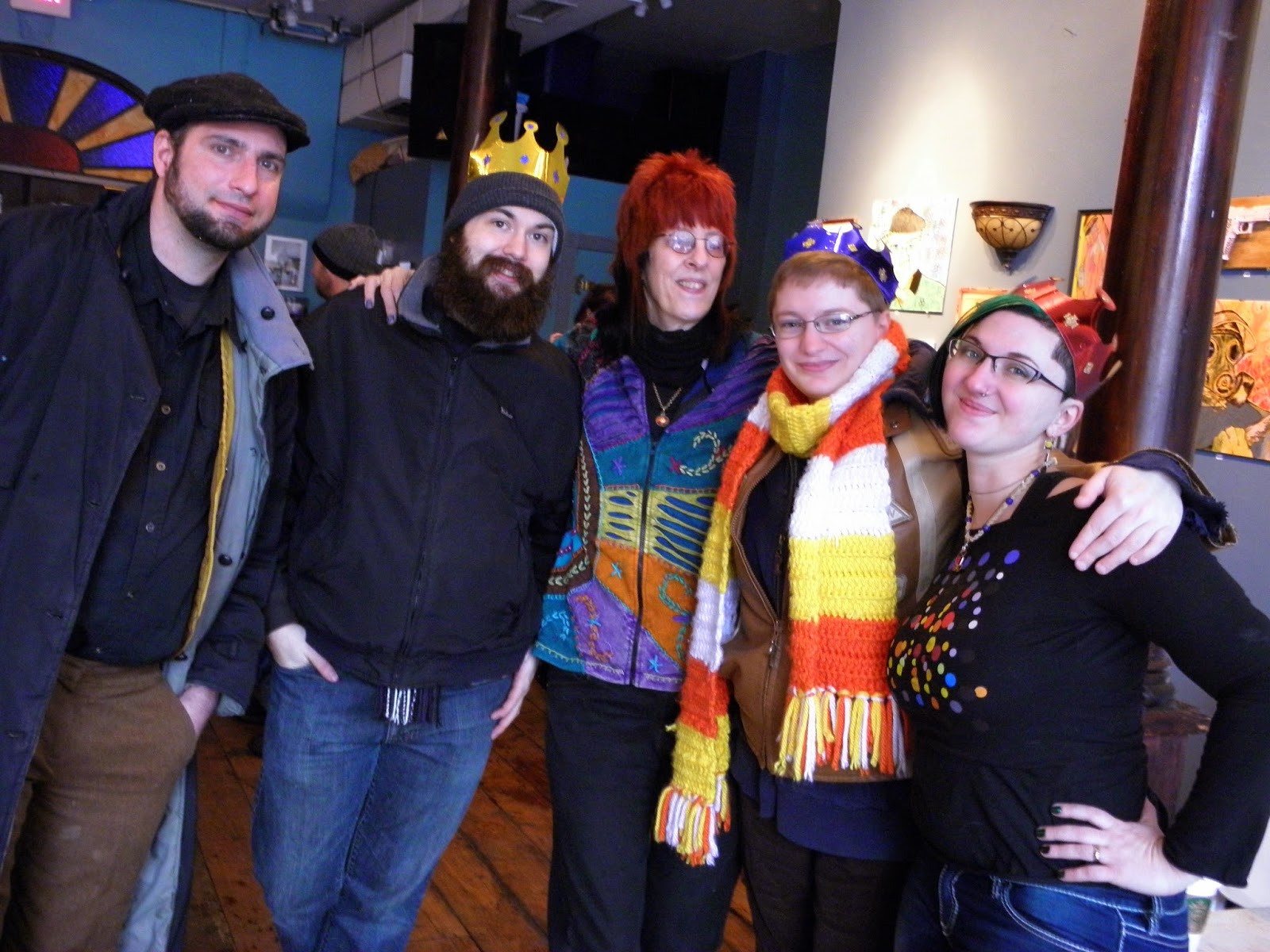 As the all too frequent sight of snow flakes accumulating to make their presence known on Saturday February 21st, The Sherman Theater's Living Room in Stroudsburg, PA hosted a Birthday ART JAM in order to celebrate the birth of Joy Taney, Carolyn Burbage, Vid Ryan, Stephan Tsapatoris, and Melissa Benzinger. The celebration included music performed by a variety of musicians and singers who joyfully shared their skills in the Jam Session that lasted throughout the afternoon. There were also opportunities for those who would explore their creative skills in the visual arts through the many sketchbooks on hand during the event. And, there was plenty of pizza, chicken wings, and (of course) Birthday cake to enjoy while listening to the music and partaking of the conversation shared with those who braved the wintry conditions to attend the gathering.


As I entered the warmth of the room, members of The Juggernaut String Band www.facebook.com/JuggernautStringBand were in the process of tuning their various instruments that ranged from violins to banjos while exploring the possibilities of musical genres they would play. These members included Peter Taney, Joy Taney, Carolyn Burbage, and Stephan Tsapatoris. They were soon joined by the duet known as Woodrow www.facebook.com/wearewoodrow which consists of Theresa Ratcliff and Brian Brancamp. After some final preparations were made, music filled the room with a mesmerizing quality that induced all those who were enchanted by its texture to move their forms along with the rhythm that bade them to dance marvelously.

After a period of blissful enjoyment found in the listening and being effected by the tunes, a series of singers and musicians joined in to share their musical gifts. These began with the vocal renderings of Molly Brunkard who sang a piece from a Broadway musical with a powerful interpretation that was only topped by her awe inspiring voice. The musicians were later joined by Vid Ryan who lent his musical skills to the compositions that were being played. Vid is a member of The Juggernaut String Band but he mostly spent the afternoon serving as the event's photographer of which he captured some astounding images and performed other functions that made the afternoon an even more enjoyable one to those who came to it.

It was after Vid's joining to play a few songs with his band mates was the birthday cake prepared with candles set afire. A break ensued as the traditional “Happy Birthday” song was sung by the company to the celebrants. The candles were then extinguished by the honorees and the cake's slices were shared among the gathering. It was during this respite from the entertaining music were sentiments shared relating to the appreciation of friendships that were made possible by the birth of the individuals who we celebrating the occurrence. Along with the gentle and joyous words that were expressed, whose who partook of opportunities to explore their creative attributes in the visual arts shared their renderings with their friends.

The afternoon soon drew to a close after guitarist Patrick Cummings and singer Mary Mulligan shared their considerable talents with the gathering. A beauty filled the hearts of those who listened which was reflected in the thoughtful farewells that were shared between those leaving the venue at the event's conclusion. It was a great afternoon and proved to be well worth the braving of the weather conditions to the considerable number of friends who partook of it. You'll be able to view photographs taken during the event in The Birthday ART JAM of Saturday February 21st Gallery at www.facebook.com/media/set/?set=a.10153625299243761.1073741832.91146283760&type=1. You'll also be able to view photos taken at other events taking place at the venue in The Sherman Theater's Living Room 2015 Archive at www.facebook.com/forwardian.dude/media_set?set=a.10153108259710421.1073741966.636000420&type=1&notif_t=like as well as events featuring performances in The Performing Arts 2015 Archive at www.facebook.com/media/set/?set=a.789279141163124.1073741841.207838092640568&type=1.

In Addition to special events like The Birthday ART JAM, The Sherman Theater's Living Room in Stroudsburg, PA holds a weekly Open Mic Nite Series www.facebook.com/OpenMicAtTheLivingRoom every Sunday Evening beginning at 7pm with sign ins beginning at 6:30pm. Musicians, poets, writers, and anyone who would like to share something with a receptive audience are welcomed to do so. The venue also houses an Art Gallery featuring the work of local artists. Their current exhibit features the work of Al Shivers and Patrick Cummings and will be on display until February 28th. The next exhibit will be designed to bring awareness to animal and human rights featuring the work of local artists, The Artists' Reception will be Saturday March 7th and the exhibit will be on display until March 31st. Please contact the gallery’s Directors and Curators, Keyaira and Drew Ozkenel, at 570-421-2808 for more information.

Photography by Paparazzi Paul.
Posted by Unknown at 12:55 PM