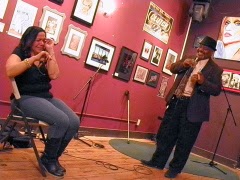 The chilled air of winter made its way back Stroudsburg, PA on Wednesday March 26th as the streets of the town filled with those seeking one form of entertainment or another. The Sherman Theater’s Living Room was hosting another installment of the weekly Kiss This Entertainment’s Comedy and Improv Open Mic so I walked through the streets of the town passing those waiting to enter the neighboring Sherman Theater for their concert and soon found myself entering The Living Room. I was greeted by Mike the bar tender and found a place to put my coat, hat, and camera case down before sitting upon the easy chair to await the arrival of the event’s denizens.

It was after their arrival were an assortments of snacks poured out into napkin lined baskets and as people began pouring in through the doors until the room filled to capacity. Conversations filled the air as stories were told in preparations for the evening’s festivities. It was during this time did one of the participates who was simply referred to as “C. W.” leave the venue and returned with a good portion of Chicken wings and rice to be shared among the company. This was a welcomed sight as his generosity was deeply appreciated by the gathering who eagerly supped upon the victuals.

It was after a number of people filled their plates and took their seats was the identity of the master of ceremonies announced by Barbara Ayala who is the CEO of Kiss This Entertainment. Don Harlem took the stage to welcome those who came out to participate and to partake of the show. He then set the mood for the evening by sharing his humorous reflections of life along with immediate observations he made and continue to make regarding all he encountered while living life up to the present moment. It was after this introduction to the evening did a gentleman named, “Luther” come to the mic.

Luther spent his moments at the mic to introduce singer/songwriter Dee “Songbird” Allen to the gathering. Dee and her remarkable talents has been well known among those who frequent The Living Rooms weekly Open Mic events on Sunday evenings and know what a treat those who have never had the opportunity to hear her were about to experience. From the first chords she strummed from her guitar whose music were quickly touched by her delectable voice to the final lyrical sigh that completed her set, the audience found themselves captivated by her musicality.

Dee was followed by another frequent denizen of the Sunday Open Mic Nite events named, “Brad” who sang nearly a cappella as there were a musical accompaniment to his song but it could only be heard by him through his audio player. Brad was followed by Jeff Evans who shared his stories relating to the employment situation many in the audience could relate to as well as other observations involving the living of life. Jeff and the laughter he encountered through his tales were followed by Paul Adam Smeltz (yeah, that’s me) who shared his stories with the audience that were intended to be humorous. Some chuckles were heard.

After Paul (aka me in the third person) finished his set, Mike the bartender took the stage to share a poem detailing the act and reactions one may experience while delving into a portion of the female anatomy. He was followed by Lakisha Williams whose tales of unexpected sexual advances on the internet brought about a great deal of laughter from the crowd. She was followed by Chas whose simple tales of relationships were kept in a book he brought to the stage with him inspired a great deal of laughter from the gathering. Chas was followed to the stage by C. W.

With cigar and drink in hand, C. W. shared his observations of life. He also revealed how his providing the gathering with some chicken was related to the poem Mike had shared. He then took to crooning several members of the female audience bringing them to hysterics. As C. W. concluded his set, I had to leave the room in order to visit another smaller room. In other words, I had to pee. I only share this bit of information because C. W. was followed by a woman known as “Jax” whose routine was so short that I missed experiencing it. Bummer.

It was at this time a number of announcements were to be made which included one made by Jean who is associated with WUN (Wake Up Now) www.WakeUpNow.com which is a direct sales technology company. Jean spent his time on the mic inviting everyone who wishes to change their lives to partake of the opportunities the company holds. News about upcoming events and special fundraising activities were also shared with the gathering.

The evening ended with dance routine performed by Brad whose catlike grace thrilled those who envied his moves. The conclusion of his performance brought about cheers and laughter from the audience who began leaving the venue while eagerly awaiting the next installment of the event as they shared their good byes with one another. You’ll be able to find more photographs taken during the Wednesday March 26th Kiss This Entertainment’s Comedy and Improv Open Mic in The Living Room 2014 Gallery Part 2 at www.facebook.com/media/set/?set=a.10152275669355421.1073741879.636000420&type=1.

The Sherman Theater’s The Living Room is located on Main Street in Stroudsburg, PA. The venue is a non-profit artspace and community hub featuring live music, performance, and other events in an intimate setting at affordable prices. Please Explore The Living Room Facebook Page at www.facebook.com/pages/The-Living-Room/123978921059378 for more information on The Living Room, all they have to offer, and how to be a part of it all.
Posted by Unknown at 1:04 PM