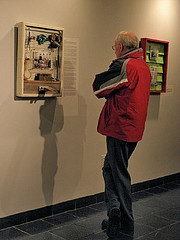 The East Stroudsburg University of PA (ESU) Art Department held an Artist’s Reception on Wednesday February 8th for an exhibition titled, “Storm Cycle” featuring the work of Thomas Mann in their Madelon Powers Gallery which is located in The Fine and Performing Arts Building on the ESU Campus. The exhibit chronicles the aftermath of hurricane Katrina which devastated the Gulf Coastal Region of the South Eastern United States in 2005. Although the center of the hurricane fell on Waveland, MS, it is best remembered for the effects it had on New Orleans, LA and its people.

The work displayed appeared in a series of Shadow Boxes which are enclosed cases in which scenes can be presented utilizing a combination of two and tree dimensional art. The medium felt particularly appropriate as each scene depicted the hopeful perseverance of each survivor while allowing the viewer to reflect upon the lives of each individual before the hurricane and how what was once their lives has now become a shadowed memory. Each piece was accompanied by a story posted upon the wall beside it. Some were amusing tales while others spoke of a soulful sorrow with all reflecting the enormity of the human experience which dwarfed the winds and waters that touched their lives.

The reception was well attended in spite of the mild snow shower that began just minutes prior to its commencement. It was as if a Northeast PA weather sought to greet its South Eastern counterpart minus the devastation. Regardless of the meteorological intent, the work and the conversation made for an enjoyable event in which one can gently reflect upon how vulnerable we are to the elements around us in spite of our self assuring technologies. The reception included a gallery talk given by Mr. Mann which humorously touched upon such realizations. You’ll find more photographs taken during the reception in The ESU 2012 Gallery at www.facebook.com/media/set/?set=a.10150661494755421.450297.636000420&type=3&l=e882125dc2.

Thomas Mann’s early life centered around sights and sounds found in the Lehigh Valley, PA area in which he discovered his love and aptitude for the arts. He later became a student at East Stroudsburg University with the intent of earning a degree in physical education but succumbed to his muse and graduated with a degree in the performing arts. Since that time, Mr. Mann has gained a reputation as a Jewelry artist showing his work around the country. He now resides in New Orleans, LA and owns the I/O Gallery. You can gain more information about Thomas Mann and his work by exploring his website at www.thomasmann.com.

The “Storm Cycle” exhibition featuring the work of Thomas Mann continues at Madelon Powers Gallery which is located in The Fine and Performing Arts Building on the ESU Campus until March 9th. Future exhibitions presented by The East Stroudsburg University of PA Art Department will include The Art Association All University Student Juried Art Exhibit March 21st - April 13th, and The Senior Seminar and Portfolio in Art Student Exhibition April 19th - May 8th. Please contact The East Stroudsburg University Art Department at 570-422-3695 for more information.