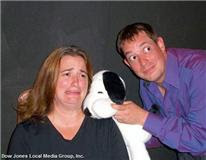 The Shawnee Playhouse in Shawnee on the Delaware, PA presented The Center Stage Players‘ production of “Beyond Therapy” by Christopher Durang. The original production opened at The Marymount Manhattan Theatre on January 1, 1981 and ran for 30 performances. After eleven previews, the play opened on May 26, 1982 at the Brooks Atkinson Theatre where it ran for 21 performances. It is now a very popular among colleges and community theatres such as The Center Stage Players who are considering what plays to include in their theatrical season.

Playwright Christopher Durang is well know for his farcical comedies exploring the absurd and outrageous nature of human relationships. This production of “Beyond Therapy” faithfully reflects the playwright’s perception of the human condition resulting in a very funny night at the theatre. This is no easy task to perform as demonstrated by the production of the 1987 film version which was rewritten substantially by its director the late great Robert Altman which proved to be a critical and commercial failure to which Christopher Durang has been quoted to say it was "a very unhappy experience and outcome" as well as calling it "horrific." I don’t presume to speak for Mr. Durang, but this reviewer thinks his assessment of this production would be quite different.

The play begins when a man named, “Bruce” as portrayed by Dan Eash who also serves on The Center Stage Players’ Board of Directors and a woman named “Prudence” as portrayed by Nicole Dietze who meet in a restaurant after answering each others personal ads. It’s soon discovered Bruce is a highly emotional bisexual who tends to cry easily and Prudence is a bit on the Homophobic side. Not a match made on E harmony. However, they learn they have something in common. They hate each other.

After the “Date,” they are seen speaking to their perspective therapists Sarah McCarrol as Charlotte and Mark Pender as Stuart who seem to have quite a number of psychological issues of their own. Stuart has issues with his manhood which leads him to take advantage of his female patience vulnerabilities and sexually seduces them while Charlotte what some text books refer to as a “Nut Job” who utilized a stuffed Peanuts’ Snoopy and peculiar references to the play and film “Equus” to treat her patients which she often mistakenly calls “Porpoises.”

Later, after re writing their personal ads, Bruce and Prudence meet again in the same restaurant believing they are different people. During the course of their attempt of engraining in a civil conversation in spite of their previous encounter, they begin to like each other and they do, in fact, become different people. They decide to have a future dinner at Bruce’s home which his Live In Lover Bob as portrayed by Glenn Geiser-Getz is not too happy about and threatens suicide thus leading to the involvement of the play’s psychiatrist who make matters worse much to the delight of the audience.

The play explore the psycho babble that was prevalent in the 70s and 80s which were treated as gospel by many psychiatrists of the time and the profession’s change in cataloging homosexuality from a mental illness to a sexual preference is also touched upon. In fact, the only drawback of the play is it often reflects the attitude toward the gay lifestyle of the time it was written. The characters’ names Bruce and Bob are very stereotypical as is Bruce’s propensity of bursting into tears whenever he is upset. However, once we’re “Beyond” these dated cultural restrictions, we can experience the play on its own comedic merits and just enjoy the evening laughing. Something this reviewer and those surrounding him in the audience did a great deal of.

This Production of “Beyond Therapy” by Christopher Durang was very well done with the acting spot on. This includes that of Patrick Murphy who had a minor role of the restaurant’s waiter Andrew who develops a mutual romantic interest with Bob. Yet, it was through his talent typical of the remainder of the cast in which the audience found his character interesting enough that many wanted to know more about him. In other words, his portrayal was subtle yet significant.

The Executive Director of The Shawnee Playhouse is Midge McClosky while the producers are Ginny and Charlie Kirkwood. The Sales Manager is Mary Horn while members of the Box Office Staff are Becky Haskell and Chrissy McManus. The Playhouse’s costumer is Missy Benefield. The Shawnee Playhouse publicity is handled by Amy Cramer while David Schrage is its Webmaster.

This presentation of The Center Stage Players’ production of “Beyond Therapy” by Christopher Durang will conclude its run at The Shawnee Playhouse in Shawnee on the Delaware, PA on Sunday September 19th and this reviewer was unable to make his recommendation of this play until now. However, there are two more days in which you can see it and this reviewer suggest you do so without haste. You’ll find it not only enjoyable but beyond therapeutic. You can stop groaning at the joke anytime now.

The next Shawnee Playhouse in Shawnee on the Delaware, PA presentations will include The Center Stage Production of Neil Simon’s “Rumors” running from September 24th until October 24th, The Frightening Film Festival featuring 13 Horror Films running October 29th - 31st, and “Le Cirque Des Mort” on Saturday October 30th featuring a gothic circus with a musical performance by “This Way to the Egress.” Please contact The Shawnee Playhouse at 570-421-5093 or Explore their Website at www.theshawneeplayhouse.com for more information and to reserve your ticket. Please feel free to Explore The Center Stage Players’ Website at www.centerstageplayers.org to learn more information about them.

Those who enjoy the Passionate Art Lover level of membership in The Forwardian Arts Society are offered a $3.00 discount off the admission fee of selected production of The Shawnee Playhouse.

Photograph provided by The Shawnee Playhouse and depicts the characters in The Center Stage Players‘ Production of “Beyond Therapy” by Christopher Durang.
Posted by Unknown at 1:12 PM